Is Underachieving Your Worst Fear?

Is Underachieving Your Worst Fear?

Going through high school with flying colors brings praise from friends, family and professors. Students that are ahead of the pack enjoy many benefits indeed, one of the greatest rewards being a sense of high self-esteem. But, crowning achievements in high school do not guarantee winning accolades at college. A university level of education is a much more challenging and competitive environment where other exceptional students are ready to get busy. Consequently, many newcomers are perturbed by the prospects of failure.

Students who once held all the aces easily become insecure about acing a single test. Some of them even fall at the first hurdle, being completely unprepared for the challenges ahead. All that excessive praise during earlier years has now disappeared like the a morning mist in the breeze. Good marks were a solid testimony of someone’s worth, and now they resemble more a testament of a once-successful student. Many have trouble adapting once the bar is raised and students with strong backgrounds and ambition show up.

This is due to the fact that, when appraising performance, youngsters use their prior results, or the results of their classmates as reference points. So, students with low self-esteem end up putting up an inconsistent academic performance. Failure only adds fuel to the fire, eroding motivation and self-confidence. There are also success-oriented students who are off to a flying start, but experience emotional tear and wear. They try to cover the fear of underachieving by minimizing the chances of defeat and putting a great deal of effort into studying.

The rise and fall

Fear is a paralyzing menace. Unlike a specific phobia, an anxiety that surrounds the anticipated failure is blurry and highly-subjective. Its manifestations can take a concrete form: expecting ridicule from classmates, disappointment from parents or losing the trust of a professor. It can induce self-handicapping behaviors, the most common one being the practice of upholding effort. That is the only way some students see. They want to avoid the risk of failure at all costs, so they chose to throw in the towel, or dispassionately fight a losing battle.

Everything seems better in their eyes than revealing their low ability. However, sabotaging your performance in this way is something that only leads downhill. Sooner or later, the monster has to be faced. However terrifying this encounter with your own fears might be, it can do great things for you and allow a proper gauge to your abilities. It is a tough call, but we all need to accept our shortcomings and limitations.

Ultimately, this is something that may unveil the “fear behind the fear” the thing that makes failure so intimidating

So, it turns out that an early experience of flopping in school actually prepares students better for what awaits them as they climb the academic ladder. It aids in formulating realistic expectations and coping with the feelings of guilt or shame that are tied to the sense of incompetence and inability. Do note that, most often, marks are not the perfect reflection of your effort and ability. Instead, focus on your skills and knowledge and ask yourself how much you have improved lately.

A student can always fail exams, projects may blow up in your face, but you always need to live to fight another day. Going back to square one must not turn into a morale-shattering defeat. Use this experience to take a step back and refocus. If you hit a wall again, do not hesitate to seek help. A life coach may seem like a distant thought, but many are those who got back on track with the help of a professional. Key coaching questions are milestones that provide direction for the journey to the world where people simply clear the dust from the fall and move on.

It is often the fear of underachieving that is the greatest obstacle before us, not the difficulty of the task. The bitter, yet sobering truth is that you cannot protect yourself from experiencing failure. It is an integral part of life, academic or otherwise. Failing at the beginning of your endeavor or at its critical point only helps you evaluate yourself better and come up with a better approach to the upcoming tasks. So, learn to rise to the occasion even when things look hopeless. Learn how to snatch victory from the jaws of defeat and you will be able to turn any disadvantaged situation around.

Follow our blog for more Open University news and updates 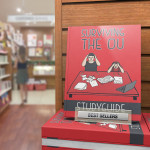