‘The most challenging yet rewarding course I’ve ever done’

Wow, what a course. If you’ve read other module reviews for A200 then you’ll know that it’s the nuts and bolts of studying History at degree level. It aims to teach you all the skills that a historian needs, how and why other historians have interpreted events of the past and how to make your own arguments based on evidence. You’ll learn how to analyse sources, read between the lines and link relevant threads together to form your own views. Many students will say that this module won’t teach you much about history (as its focus is on historiography) but I believe that’s a matter of opinion.

I’ve just finished A200 and before I started I really didn’t know a lot about history. I chose this module because the history elements of AA100 had opened up my eyes to the fascinating subject it could be. Prior to that, I hadn’t studied (or paid any interest to) history since I was 13 (I’m now married with children and a ‘bit’ older).

With such little experience I knew this module would be a big challenge. I honestly didn’t know if I could do it and I certainly didn’t expect to enjoy it. I saw it as a necessary hoop to get to all the interesting bits of history – something that other reviews about the module had led me to believe. 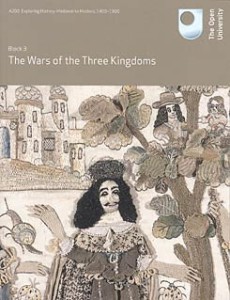 I’ve learned all kinds of historical facts! I understand how our world changed from the very different medieval past to what we now understand to be the modern world. I understand common motivating factors of change and themes that reoccur time and again. I’ve learned how different countries were formed, I’ve learned about key figures that played significant roles in changing the world and why religion is important to understanding our past. I know lots about the Atlantic slave trade, the Reformation, King Charles I, Napoleon, The French Revolution, The British Empire, Imperialism and more. I can reel off dates and parliamentary acts, battles and events. So some students may know lots about history before they start this module but for me, I’ve learned absolutely loads of history AND how to study it properly.

Did I enjoy this module?

That’s tricky. I can now say with ease that I LOVE the fact that I completed this module but it didn’t always feel so happy along the way. I break the module down into three parts:

The beginning – Things didn’t start so well and it wasn’t nearly as interesting as I’d hoped it might be. The reading was difficult and appeared to jump all over the place. I wasn’t sure that I had done the right thing and it was a struggle to keep motivated.

The middle – I began enjoying parts of the study but putting what I had learned into a TMA became seriously hard work. I felt challenged beyond my capabilities and thought I had reached my limit but I somehow kept going. I could flip from sheer mental exhaustion one day to utter pride and ecstasy at my results the next. This was a rollercoaster period.

Towards the end – Everything started to click together (my tutor said that would happen). I began to thrive, I understood connections and I enjoyed what I was doing but then there was the effort of preparing for the exam!

So did I enjoy this module? The honest answer is both yes and no. At times I disliked it and at others I adored it, however I’m SO pleased that I chose to do it. Now it’s over I am prouder in an academic sense than I’ve ever been before. A200 challenged and pushed me beyond my breaking point but that’s just the point, I went beyond and now feel confident that I have all the skills to move forward with my studies.

Would I recommend it? Yes! Challenge yourself, embrace it and trust what your tutor says. If I can do it, anyone can.

Rating: 86% – If you’re willing to try and willing to push through then you just might consider this a ‘first-class’ module!

Leanne is half way through a BA (Hons) in History with the Open University and enjoys writing as a freelancer as well as on her blog. Find out more here. You can catch up on all of Leanne’s excellent contributions on STOU here.

Have you taken A200 or a similar Open University module? How did you find it? We’d love to hear your thoughts! Feel free to leave a comment below or a LIKE/TWEET/SHARE across our social media platforms.