5 Things To Check Before Signing An Employment Contract

Before taking on a new job, you usually have to sign a contract given by your employer. It’s also too easy to skim over this paperwork and trust your new employer – you may be thankful that you’ve got the job and not want to cause any more complications. However, you could be signing up to things that you didn’t intend to, which could affect your later. Here are some things to look out for when reading your employment contract.

Many employer use vague job titles and job descriptions that allow them to delegate all manner of jobs. You could find yourself carrying out tasks you didn’t sign up for such as being asked to do telesales in a role that was supposed to be customer service but was worded as ‘telephone operator’. Some shady employers may also use the word ‘executive’ for what might first seem like a management position – ‘executive’ means nothing and gives them the option to trial you as an average employees first and potentially never give you that management role. Always ask about any wording that you think isn’t right and get it changed so that you’re doing the job you applied for.

Make sure that the salary is as you discussed when applying. It could be worth checking if tax is included. Be wary of employers that want to start you off on a lower wage and claim that you’ll have the chance to raise your salary later – it could just be an excuse to keep your salary low. 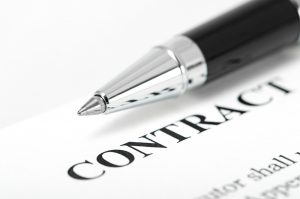 You may asked to work flexible hours, which could include weekends and evenings. A zero-hour contract meanwhile may allow an employer to give you as little hours as they can. Clear this up with your employer so that you’re not signing up to too many or too little hours. If you think you’re not being given the right amount of hours, it could be worth getting in contact with your local Citizen’s Advice Bureau.

This is very important. Your employer will discuss the things that could lead to the termination of your contract. If they try to make your leave without you meeting the criteria in the contract, this could be unfair dismissal. There are lawyers that can help argue against these cases such as Anderson Gray unfair dismissal lawyers – having a copy of the contract will help. Also look into clauses concerning what will happen if a new employer takes over. It’s good to have a protection clause in there that stop a potential new employer laying you off when they take over.

The contract should also let you know of what incentives you’re titled to. This could include commission or end of year bonuses. Check that these are ‘guaranteed’ and not ‘discretionary’. You may also want to look into perks such as holiday pay and sick leave, not to mention any assets you may be given such as a company car or a work phone.